Fight against the underworld

The film tells the justice story of song Yirui, the leader of the anti Mafia special group, leading the team members to conduct an in-depth investigation of a land acquisition and demolition case, breaking through the layers of obstruction, and launching a fierce struggle with the evil forces behind the scenes.

After receiving reports from the masses, a serious crime of violent death occurred in Zhaojia village of Weihe County in the process of demolition and reconstruction, so the provincial government sent a special team to investigate. Under the leadership of the group leader song Yirui (Jiang Wu), the ad hoc group follows Zhao's father and son, the village tyrant of Zhaojia village, and finds out the planning director Qi Feiyu who adjusted the planning scheme. However, when the case first appeared, Qi Feiyu jumped from a building and committed suicide in the ad hoc group's residence. In the process of investigation, the collusion between the local underworld forces headed by sun Zhibiao (Jin Shijia), general manager of Hongyuan Group, and the local public security system is almost a clear line. When sun Zhibiao faced further investigation, the special group was threatened for the second time. The masses who participated in the reconstruction project fund-raising were instigated to have a serious fight with the special group, resulting in bad network public opinion. The special group was forced to leave temporarily and return to the province to report on their work. Just at this time, the case suddenly turns around, and another dark line emerges. It is Cao Zhiyuan (Zhang Songwen), the county magistrate, who has been showing the image of elegance and justice before. He is not only the lover of Lin Qiaoer (Li Qian), general manager of Binhe group, but also sun Zhibiao's half brother. The father of sun and Cao is Cao Shunhua, former Secretary of the county Party committee. In the end, the dream of Cao's father and son covering the sky with only one hand was broken, and the people of Weihe county also found hope.

You Yong as director Xia

Wu Shuang as a Rhododendron

Liu Junqi as worker B

Wang Jianlong as the leader of Discipline Inspection Commission

The investigation team led by the leader of the special task force against gangs and evils is determined to investigate the "violent land expropriation case". Break through the layers of obstruction, launch a fierce struggle with the black and evil forces behind the scenes, finally untie the false mask of corrupt officials using public power as a criminal umbrella, and bring the criminals to justice.

Weihe county magistrate, grassroots leading cadres, mixed in the officialdom, far familiar with the officialdom. Zeng interpreted "in ancient times, the local power was like the emperor", threatened to "dig out the dirtiest and darkest place in Weihe county", and even took a table at the county Party committee meeting to swear "I will catch one if I see one.".

The "violent land expropriation" is the leader of the evil forces, who is arrogant and violent, acts rampant, cruel and even indifferent to other people's lives. It not only involves despicable acts such as power and money trading and illegal trading, but also recklessly and madly sprinkles Ming coins on the vehicles of the investigation team. Even if they are arrested and interrogated, they will still be tyrannical.

A woman with a relatively complex human nature, there are women's weakness, there are women's strong. He was a respectable businessman, but he actually relied on Cao Zhiyuan's relationship. Then he got a lot of money from all the projects in the county after falsely reporting high prices, and then it flowed into sun Zhibiao's hands to carry out "printing money" and various kinds of development. Deep in the whirlpool of emotion, I don't feel like a chess piece.

The film was shot in Huizhou, Guangdong Province, China, where it is rainy and the weather is uncertain. The sudden heavy rain often breaks the original shooting plan.

The creation of the film has carried out type narrative expansion and commercial element innovation. From script polishing, actor invitation to action scene design, the film always takes into account the standard of commercial type film and the aesthetic needs of the public, and strives to bring the audience a refreshing experience of theme type.

Jiang Wu leads the team to investigate the case

As a realist film, "fight against the underworld · decisive battle" is closely related to the life of the common people. In the film, the innocent people complain that there is no way, and the contractors can't get paid, but their families are destroyed. It reproduces the destruction of the underworld and evil forces on the common people, and the real details arouse the audience's hatred of the underworld and evil forces. The numerous pitfalls encountered by the anti gangster task force also let the audience understand the dangers of the current anti gangster work, thus generating empathy（ China Youth Online Review

Instead of saying that "the water in Weihe county is very deep", the film reveals this fact through the obstacles encountered by the song team leader of the anti Mafia investigation team played by Jiang Wu. This is much better than the usual way of trying to put the relationship between the characters on the screen. There is basically no preaching in the whole story, and there is no theme first. That is to say, the story of fighting against the evil forces is true. What's more gratifying is that the foreshadowing in the first half of the film is explained reasonably in the second half, and the logical chain of the whole story is clearly displayed. It can be said that this film is relatively "simple", but its practical significance may exceed the artistic value itself. In the current era background, the films of anti gangster and anti evil still have real enlightenment（ Surging news (review)

In this film, the innocent people have no way to complain, but are beaten up and the contractors can't ask for wages. Instead, their families are broken, which can arouse the audience's hatred for the evil forces more than simple reasoning. The pitfalls that Captain song and several team members encountered in their work can also help the audience understand where the pain points and difficulties of the current anti gangster work are, so as to generate empathy（ Surging news (review)

The style of this film is very rough, and the artistic level is not very high, but there are always some films that are needed because they are close to real life《 "Fight against the underworld · decisive battle" is a good example（ Surging news (review) 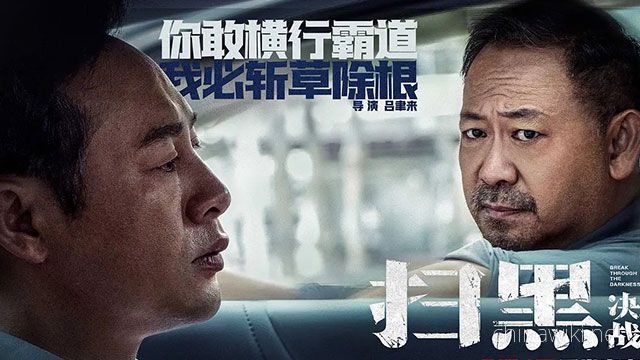