The film tells Tang Ren to cheat Qin Feng to join the world famous detective contest for a huge bonus. The competition is to find the murderer who killed the grandson of Uncle 7, the godfather of Chinatown in New York. The two men once again combined to find out the case and risk their lives to break down New York.

The film was released in Chinese mainland in February 16, 2018.

Qin Feng (Liu Haoran) received an invitation from Tang Ren (Wang Baoqiang) to New York to attend his wedding with a Xiang. The Tang Ren, who was forced by the moat, welcomed the Qin wind and waved it. It is expected that "wedding" is a world famous detective contest for huge bonuses. The competition is about the search for the murderer of the grandson of Uncle 7, the godfather of Chinatown in New York. Qin Feng, who was cheated, was furious to leave, but attracted by the message from Chen Ying, a New York Chinese criminal police officer. The death of seven uncle grandson is strange, and the search for people has risen to reward and arrest the murderer“ The famous detectives show their ability, and they fly and jump.

Another case occurred while the investigation was conducted by the public, and the method of doing the crime was very similar. The original locked killer had no evidence of his absence, and Qin Feng could not help but doubt his reasoning. The third case has been linked. Qin Feng and Tang Ren again dressed up, getting rid of all kinds of entanglement, and breaking down New York, and trying to get closer to the truth. Fourth, the murderer lost his hand and was eager to make a trick. The motive is chilling. Behind the seemingly perfect conclusion, there is another profound mystery.

Remark: black man in America, who claims to be detective

Wang Xun is a member of Lu Guofu

Notes the "a Xiang" of the last film, Tang Ren's secret love person

Remarks: one of the bodyguards in the right arm of luguofu

Wang Chengsi is the right eye

Remarks: one of the bodyguards in the right arm of luguofu

Huang Xi as a car rental driver in Shenzhou

Understand fengshui, claiming to be the first detective in Chinatown. After breaking gold theft and sompa murder in Bangkok, Tang Ren wandered to the United States to continue wandering. Invited by the host of the global detective contest, "Uncle seven", he came to investigate the case of the victim of his grandson. In order to win the 5million prize of the detective contest, Qin Feng, his nephew, was cheated to the United States in the name of "Marrying Ah Xiang" to launch the US's trip to solve the case.

Tang Ren's nephew, who is far away, usually talks with stutters, and it is very profitable to talk when analyzing cases. With a strong memory, it ranked second and third in a row on the world detective social app. This time, invited by his uncle Tang Ren, he came to the United States to attend the "wedding", but he didn't think it was a fraud set up by Tang Ren to win a five million prize. Because of the case and Tang Ren's bitter courtship, he had to participate in it.

Chinese from Bangkok to the United States are black customers with expired visas and are constantly changing jobs in the United States. It takes two years to answer the entry point of "world detective social app" to join the project, which is now ranked 1998. Because both of them appeared on the scene of the homicide, it was closely related to the case. The police suspected that they were the murderer and issued a wanted order. In order to clear the charges, they had to cooperate with Tang Ren and Qinfeng.

The New York Chinese criminal police, familiar with "Uncle seven", represents the United States Criminal Police party; Together with the detectives Tang Ren and Qinfeng invited by Uncle 7 to find the murderer of his grandson, he has great opinions on Kiko's invasion of his police department system.

Mysterious hacker in Hong Kong, one of the talented detectives. In order to solve the case, it often invades the police department system, and gets the relevant evidence from it, so it is hostile to Chen Ying. Secretly observe Qin Feng and help it from time to time.

"Seven uncle" dry son, since the beginning of the detective contest, in order to inherit all the property of "seven uncle", has been chasing Song Yi, at all costs of dirty means. He has been doing dark transactions behind the "seven uncles".

A detective from Japan, mixed blood between China and Japan, is currently ranked third in the world detective social app, and often competes with Qin Feng for the second place on the list. Because of its often social network to release their own photos, Qin Feng satirized as "narcissistic".

During the filming of the film in Chinatown, there were about 2000 people standing around during the peak period.

During the shooting process, many of Liu Haoran's shots passed by, so he was called "Liu Yi" at the scene.

Director Chen Sicheng gave up the special bus to save money, even went out to work to see the scenery all the way to take a taxi.

The film makers sit on the floor to eat lunch boxes, and discuss the filming of the next play while eating.

Creative backgroundWhen the Chinatown investigation was released, director Chen Sicheng revealed that he would shoot the second and third. He hopes to make the IP of Chinatown investigation into the "Holmes" of China, and the Chinese own detective image. As for the characters in the film, Chen Sicheng has made biographies for them according to the chronicle routine. Many background and background of characters in the first part are reflected in the sequel. Chen Sicheng wants to wrap the deep theme and cultural elements output through the business coat of Tang Dynasty Exploration Series.

In December 2015, director Chen Sicheng and Liu Haoran and other stars came to the first year university season to choose the corner.

On August 9, 2017, Chinatown exploration 2 was launched for shooting in New York, USA, and announced that the scheduled Chinese new year will be released on February 16, 2018 (the first day of the new year). October 16, the film was killed in New York. On October 23, the film was officially started in Beijing. On October 30, all the "Tangren Street Investigation 2" were killed.

On September 26th, 2017, the crew filmed the tail dance in the New York Times Square. On August 18, the film first exposed the starring Liu Haoran and two posters of "Tangren Street Investigation 2", and announced the plan for the Spring Festival in 2018. On September 10, Hollywood report, the American film media, reported on the Chinatown Investigation 2. On September 12, the film released the two dramatic photos of Tang Ren and Qinfeng and released international posters. On October 24, the crew held a media class in a studio in Beijing. On November 7, the crew released the "a Xiang" drama of Qin Feng and Tang Ren. On November 9, the film revealed the poster of "Tangren Street Investigation 2" starring in "glasses". On December 5, the crew held a Theme Conference on "hi to New York" in Beijing. On December 19, the crew released a set of posters "hi to New York.". December 21, a special feature of "New York's joy" was released. On December 27, the crew released the theme song "happy wriggling" MV.

The film continues the previous reversal of the reasoning plot, and also contains the New Year atmosphere of the family comedy elements. The continuous fermentation of good reputation makes the film strong in the long term, New York field shooting, international lineup, and perfect cooperation with the United States trade union, making the film more international than the first. Like the first film, in addition to the dense laughter points, the solid reasoning story also makes the audience enjoy. The film also involves some professional reasoning terms, such as McDonald's three elements, the principle of material exchange of Lockheed, Manhattan measurement, etc., which have become the content of "supplementary lessons" for the audience after they leave the cinema（ 1905 film network, Netease Entertainment review) 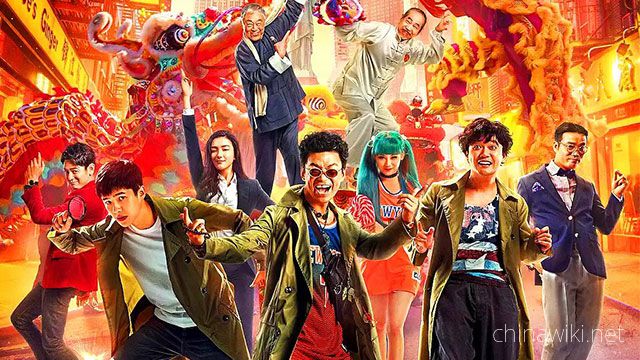