The film is adapted from Hu Jinquan's Longmen inn. The movie is set in the middle of Ming Dynasty. It tells the story of the encounter between the swordsmen of Wulin and the East Chamber experts in the desert Longmen Inn after they rescued Zhongliang. The film narrates the love and hatred of the people in the river and the lake with the lofty northwest wind. Whether it is characterization or story bearing, it has made a breakthrough on the basis of following the traditional martial arts form and created a new martial arts scene. It is known as the starting point of the new martial Arts in Hong Kong and a monument of martial arts movies.

The film was released in Hong Kong, China on August 27, 1992. On February 24, 2012, "New Dragon Gate Inn" was shown again in mainland China after the restoration of the picture and dubbing.

In the Tianshun period of the middle Ming Dynasty, Cao Shaoqin (Donnie Yen), the eunuch of the East chamber, framed Yang Yuxuan, the Minister of war, to death, and exiled his sons and daughters as bait to lead Yang Yuxuan's Ministry to Huaian (Liang Jiahui), in an attempt to get rid of his old Ministry. Chiu Mo Yan (Lin Qingxia) is entrusted by her lover Zhou Huai'an. After a bloody fight, she rescues the children of the Yang family and makes an appointment to meet at Longmen Inn in the desert border. Unexpectedly, after disguised, the three stalls of the East Hall led many experts to follow.

Jin Xiangyu (Maggie Cheung), the landlady who makes a living in a black shop, is coquettish and affectionate. She has deep feelings for Zhou Huai'an, but it's a pity that Zhou Huai'an already belongs to Qiu Mo Yan. At this time, Cao Shaoqin's troops are killing at Longmen Inn, and there are many East Hall experts in the inn. In addition, the weather in the desert is unpredictable, so Zhou Huai'an and others are struggling. In order to save Yang's orphan, Zhou Huai'an did not hesitate to find out where the secret road was on the condition of marrying Jin Xiangyu, and made an appointment with Qiu Moyan and others to escape from the secret Road on their wedding night. Unexpectedly, Cao Shaoqin's troops have already been killed.

When life, death, love and hate intertwined, Zhou, Qiu and Jin joined hands to kill the villain, but Qiu Moyan also died. Zhou Huai'an is determined to stay away from the Central Plains. Jin Xiangyu burns down the Inn and follows Zhou Huai'an. 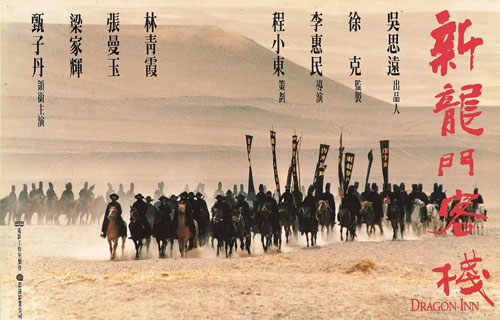