Lantern Dance is a Chinese folk dance with a long history. It is mainly performed on the Lantern Festival and has a history of at least 1000 years. The lantern dance originated from the Lantern Festival. It is a dance form with colored lanterns as props. It has various names due to different shapes of lanterns. Its performance is good in the south. Lantern dance was popular in Ming and Qing Dynasties, and there were many records in Qing Dynasty literature. The lantern dance is mainly performed at night, with colorful lights shining on the middle lights and people matching each other. It is full of interest, or forms different formations and patterns through the colored lights, or displays the words of "auspicious" and "peace in the world", or displays various artistic conceptions in the changes and interleaving.

In addition, Vietnam seems to have lantern dance, but I'm not sure because I haven't learned about it 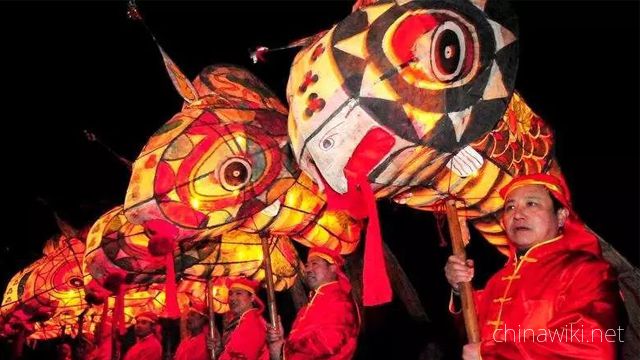 In the performance, there are lights but no people. The patterns are dynamic and static, and there are different levels of changes. It is mysterious and fascinating. Most of the dancing lamps are group dancing, and the shapes of the lamps include animals, flowers and auspicious utensils. In the performance, the dancers can dance with one lamp or even more than one person, which can be divided into various performance forms, such as holding the lamp, carrying the lamp, holding the lamp and so on. Dragon lantern and carp lantern are the most wonderful forms of lantern dance, and "carp dancing in the dragon's gate" shows the folklore of the changes of dragon and fish. Dragon lantern is also known as fire dragon, from dragon head, dragon body to dragon tail can be more than 20 sections, each section lights a candle, a person holding a bead to tease. The performances include "drama beads", "Wave Piercing" and "Golden Dragon and jade pillars". During the performance, the masses lit more fireworks and fireworks to boost the fun, and the atmosphere was warm.

By the Qing Dynasty, the Lantern Dance had developed to a higher level, and had a certain performance program and name《 Yan Pao Za Ji records: during the Lantern Festival during the reign of Emperor Qianlong, there were 3000 dancers in the West Hall of Beijing. Each dancer held a colorful lantern mouth and sang "Taiping song". They danced in a circle, changed their formation, and arranged into Taiping, Wansui and Sui in turn《 Jinle textual research records that there were 36 sets of Lantern Dance Performance routines at that time, such as Taiji Hunyuan, Sixiang shengbafeng, Jinka and so on. Meaning auspicious, such as: heavy joy, five color auspicious clouds, money everywhere. In the name of poetry, such as: Jinlian step by step, Peacock flying south, fire dragon playing in the sea, etc. Related to the ancient battle array, such as Yuanyang array, Zhanqi camp, etc. The lantern dance is performed by 12 people, each holding two lanterns, while dancing and singing "happy moving Mandarin" and "joy in the world". Such a wonderful performance is naturally the work of a knowledgeable expert.

Kong Shangren, the author of Peach Blossom Fan, also has a description of the lantern dance. In his poem "dancing the lantern, leaving a gift to Liuxiang Pavilion", he describes the wonderful and moving performance of 12 women. There are some famous lines in the poem, such as "twelve gold and twenty-four lights", "thousand twists and turns are hard to remember", "it's not a pomp of the old courtyard, every dance is a change of scenery", "seeing the Qin city change into the Han Palace, it will collapse into a flat land in an instant". At last, it quotes Zhang Xu's allusion about gongsunniang's progress in cursive script after her sword dance, praises that the artistic effect of lantern dance is better than that of sword dance, and concludes the whole poem with "calligraphy is realized in gongsunniang, let alone dance is better than sword dance". The lantern dance performed by 12 women can be so fascinating. There is no doubt that the level of Lantern Dance reached at that time. During the Anti Japanese War, lantern dance played a role in publicizing revolution. For example, Taihang mountain base has performed "five-star lamp", "torch lamp" and other new lamp dances. After the founding of the people's Republic of China, the lotus lamp originated from the folk was put on the stage and adapted into lotus dance, which has a high artistic sublimation in props, costumes, performing mood and so on. It expressed the Chinese people's love for peace, became an excellent dance program at home and abroad, and won the silver medal in the world youth festival in 1953.

In the "Lantern Dance", the "Niu Er Deng" has local characteristics. The "Niu Er Deng" uses bamboo braided ox head, black hemp cloth as the body, and hemp rope dyed black as the tail. The two people work together to put on cowhide and ox head, and then the shepherd boy accompanies them to dance a difficult action, such as drilling a fire circle, climbing a bench and turning over a high platform, to show happiness and auspiciousness.

"Watermelon lantern" is a new program in the 1980s. Because the local out of a "watermelon king" Liu Lankai, the watermelon is very famous, big and sweet. In order to praise the good policy of reform and opening up, people make "watermelon" like lamps

Chinese traditional folk dance. It is mainly performed on the Lantern Festival and has a history of at least 1000 years. The lamps with different forms can be roughly divided into three categories: 1. Those that simulate animal images, such as dragon lamp, fish lamp, crane lamp, Phoenix lamp, unicorn lamp, hundred bird lamp, etc; ② Simulation of flowers, such as lotus lamp, butterfly lamp, etc; ③ Other shapes, such as boat lamp, lamp, umbrella lamp, cloud lamp, etc. When dancing, some hold the lamp in their hands, such as a fish lamp; Some carry on the shoulder, such as tea basket lamp; Some hang at the waist, such as boat lights; Some embroidered on the legs, such as lotus lamp; Some on the ground put out patterns, such as the Yellow River Jiuqu lamp; Some people dance with one lamp, some dance with two lamps, and some dance with many people with one lamp, such as the Dragon lamp. Most of the lantern dances are group dances. They are performed at night with colorful lights and warm atmosphere, accompanied by gongs and drums, fireworks and firecrackers. 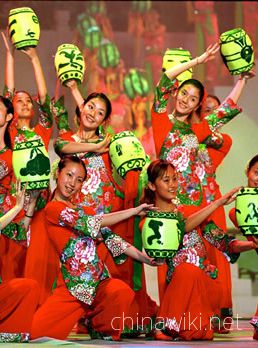