Tianmen Mountain Scenic Area, located in the southern suburb of Zhangjiajie City, 8 kilometers, is a national 5A-level tourist area, a mountain-type natural scenic spot. The total area is 96 square kilometers and the peak area is 2 square kilometers. The main peak of Tianmen Mountain Scenic Area is 1518.6 meters above sea level. It is the highest mountain in Zhangjiajie. It was called Songliang Mountain in ancient times, also known as Mengshan and Fanghu Mountain.

A total of 999 steps up the ladder, is the way to access the gate of heaven, but also the wishes and prayers of the spiritual land.

Tianmen Mountain Cableway, the longest passenger ropeway in the world, has 98 sedan cars and 57 ropeway brackets (including 3 ambulance brackets), all of which are imported from POMA Company of France.

the broad road tO horizon

Tongtian Avenue is named for its access to Tianmen Cave. It is 10.77 kilometers long and winding 99 bends. Every 9 bays, there is a stone tablet as a symbol. 99 bays are closing to the sky with the meaning of nine clouds. It is one of the ten scenic spots in Tianmen Mountain.

Stone Forest in the Air--Bonsai View

As a national forest park, the top of Tianmen Mountain has complete virgin forest, and the core protected area of virgin forest is Yaotai Scenic Area in Biye. Here, mossy rocks can be seen everywhere, rare tree species and precious medicinal materials are also found from time to time. The whole scenic area is like a natural bonsai. Tourists can enjoy the fun of nature as they walk along the winding road. Biye Yaotai Scenic Area, located in the eastern part of the top of the mountain, is characterized by natural scenery. It has more than 20 scenic spots. It is the largest of the four scenic spots in Tianmen Mountain.

Lingquan, known as the "Shenquan" by the local people, springs gushed from the rock crevices and never dried up for many years. Lingquan Courtyard of Lingquan Courtyard, which is cool and sweet, was named for Lingquan. It was built in the Tang Dynasty, where Zhou Pu, a virgin, once lived in seclusion.

Yunmeng Xianding is one of the sixteen peaks of Tianmen Mountain.

Tianmen Mountain has a complete primitive sub-forest, full of wild interest throughout the year, is a rare "primitive sky garden".

Searching for fairyland scenic spot, located in the west of the top of the mountain, is the birthplace of "hermit culture" and "fairy mountain culture" in Tianmen Mountain.

Qier Cave is one of the sixteen caves in Tianmen Mountain. Folk legend tells us that Goddess of Mercy is sacred here. If you wish, you can ask for your children.

Ghost Valley Cave, one of the sixteen caves in Tianmen Mountains, was once home to study Yi.

The core scenic spots on the western route.

Soar to the skies

Together with Yunmeng Xianding, it is one of the two main landscapes of Tianmen Mountain, the core scenic spot of the western route.

The whole length of the trestle road is 1600 meters, with an average elevation of 1400 meters. The starting point is Yihongguan and the ending point is Xiaotianmen. Unlike other trestle roads, the whole line of Ghost Valley Trestle Road is neither on the top of the cliff nor on the side of the cliff, but in the middle of the Wanzhang Cliff.

The glass trestle road is 60 meters long and 1430 meters above sea level.

As early as in the Three Kingdoms, Zhangjiajie did not have a county, only an Acropolis named Dayongwei, which was under the jurisdiction of Cili County, Wuling County, and belonged to the territory of Wu State. Songliang Mountain is a scenic spot of Wu State. In the six years of Wu Yongan, the Three Kingdoms (263 A.D.), a heavenly gate suddenly collapsed on the cliff of Songliang Mountain, which was ten thousand feet high.

When Dayong people saw Songliang cave open, a heavenly gate appeared, and there was a lot of controversy. People in the city think that this is an auspicious sign. They think that when Songliang cave opens and purple air comes east, Dayong will surely be blessed to come. So many people crawled to the ground and begged for auspicious luck. A Taoist in the city, when he saw the opening of Songliang Cave, was frightened to the earth. He wailed bitterly, shouted at the heavens and was furious. Songliang collapsed, and Dayong's fortune flew empty and empty. From then on, Dayong would not be peaceful.

Someone reported the news to Sun Xiu, king of Wu. When Sun Xiu came to the scene, he laughed and said, "This is a sign of auspiciousness. "The Wuling County will be cut in half and Tianmen County will be set up in Dayong. From then on, Songliang Mountain was renamed Tianmen Mountain.

The railway station takes buses No. 6 and No. 5 and can reach the next station of Tianmenshan Cableway within 5 minutes.

The airport takes bus No. 4 and can reach the next stop of Tianmenshan Cableway in 8 minutes.

Bus stops on buses No. 4, No. 5 and No. 10 can reach the next stop of Tianmenshan Cableway within 10 minutes.

From Cherry Bay to Qiuer Cave, one of the "Sixteen Caves of Tianmen", we can see Guigu Cave in the sights of Guigu Cave, comprehend the depth of ancient philosophical thought in "Yihe". We can see the wonderland and stone landscape belt and Xiaotianmen. Then we can visit Wild Fuzangbao, Guigu Bingpan, Guigu Tiancave and Yihongguan. View the landscape of Zhangjiajie downtown and its surrounding area at Lingxiaotai, then take the ropeway down the mountain.

Take the environmental protection vehicle, feel "the world's first highway spectacle" Tongtian Avenue, along the way to enjoy the Seven-level waterfall, turtle Yuanbao, General Peak, Arrow Peak and other landscapes. Arrive on the ladder, climb the ladder of 999 steps and reach the bottom of Tianmen Cave.

In March 2006, more than 30 media, such as Netease and Global Travel Newspaper, jointly selected "50 places that are most worthy of foreigners to visit in China". Tianmen Mountain won the gold medal alongside top Chinese tourism brands such as the Great Wall, Terracotta Warriors and Horses, Huangshan, Taishan and Dunhuang. 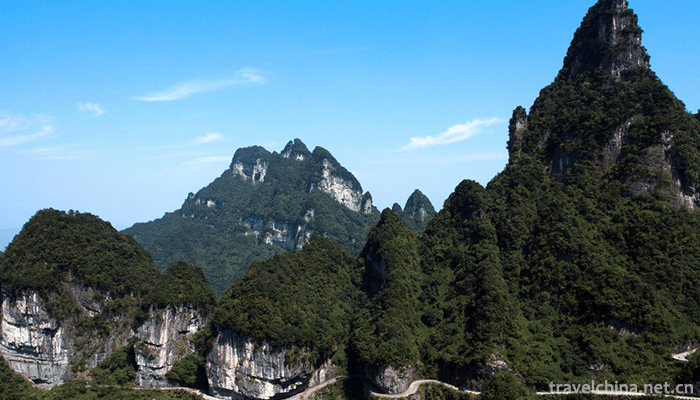