Adapted from the Chinese mythology, this film tells the story of Nezha's growing up experience of "fighting against the sky to the end" though he was born to be a devil. The film was released in mainland China on July 26, 2019.

On October 8, 2019, the movie "the devil child of Nezha" will represent the mainland of China to stand for the 92nd Oscar Best International Film (the original best foreign language film) in 2020.

The spirit of heaven and earth gave birth to a Hunyuan pearl with huge energy. At the beginning of the Yuan Dynasty, the God refined the Hunyuan pearl into a spirit pearl and a magic pill. The spirit Pearl was born into a human being, which could be used to help the Zhou Dynasty to conquer the Zhou Dynasty, while the magic pill would give birth to a devil king, which would bring disaster to the world. At the beginning, Tianzun started the curse of Tianjie. Three years later, Tianlei will come and destroy the magic pill. Taiyi is ordered to bear lingzhutuo on Nezha, the son of Li Jing's family in chentangguan. However, it's a mistake. Lingzhu and magic pill are actually left behind. Nezha, who was supposed to be the hero of the Pearl, has become the great demon of the mixed world. However, this naughty and mischievous Nezha has nothing to do with being a hero. However, in the face of people's misunderstanding of Nezha and the coming of Tianlei, whether Nezha is destined to become a devil or not, and where he will go. 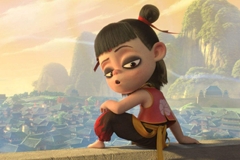